This article has been written to clarify the role and responsibilities of fire suppression personnel, illustrating important considerations in the fire investigation process and explaining the impact of firefighter’s efforts in preserving the fire scene and physical evidence.

PRESERVATION OF THE FIRE SCENE AND PHYSICAL EVIDENCE:

The responsibility for preserving the fire scene and physical evidence does not lie solely with the fire investigator but with all personnel on the scene especially fire suppression forces. Firefighters should make every attempt to protect and preserve the entire fire scene, intact and undisturbed, and keep the contents, fixtures, and furnishings in their pre-fire locations. It is through a systematic examination and analysis of the fire scene that the investigator determines the fire’s origin, cause, and ignition circumstances. 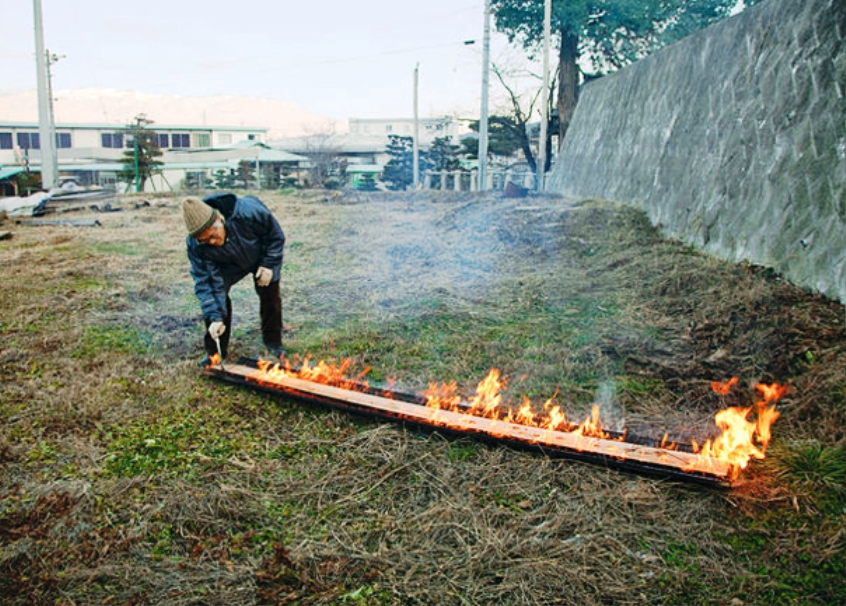 Unlike other types of investigations, fire investigations pose special problems relating to evidence. The principle to consider regarding preservation of a fire scene

is applicable to every fire scene whether the fire is determined to be accidental or incendiary. The fire cause generally is not known until near the end of the investigation. Therefore, the evidentiary or interpretative value of various pieces of physical evidence observed and analyzed at the scene may not be known until at or near the end of the fire scene examination or until the overall investigation is concluded. As a result, firefighters should consider the entire fire scene “physical evidence” and protect and preserve it as such.

Preserving the fire scene begins with first-arriving units. Improper preservation usually results in the destruction, contamination, loss, or unnecessary movement of physical evidence within the fire scene,   which may reduce its value. Thus, the Incident Commander or fire investigator should secure the scene from unnecessary and unauthorized intrusions and limit fire suppression activities to those which are absolutely necessary. Do not think of evidence at the scene only in a criminal context. Consider everything at the scene as evidence from the physical structure to the contents, the fire pattern, other artifacts, and any ignited materials.

Fire patterns are defined as, “the visible or measurable physical effects that remain after a fire.” These include thermal effects on materials such as charring, oxidation, consumption of combustibles, smoke and soot deposits, distortion, melting, color changes, changes in the character of materials, structural collapse, and other effects.” They are equally as valuable as the identification of a potential ignition source such as an incendiary device in an arson fire or an appliance in an accidental fire. They represent the entire burn history of the fire. Therefore, the most critical firefighting function on the fire scene, from an investigator’s perspective, is the preservation of fire patterns.  It is essential to the investigators conducting an accurate analysis to determine the area of fire origin. How important is determining the area of origin in the overall investigation? “Generally, if the origin of a fire cannot be determined, the cause cannot be determined.” Thus, if the investigator cannot determine the area of origin, the fire cause usually is classified as “undetermined.”

The investigator often finds artifact evidence through a careful, systematic examination of the scene. An artifact is an item or material that may be the remains of the material first ignited, the ignition source, or another item or component related to the fire. Otherwise, an artifact generally is considered a singular item of relative value or importance to the incident. In their attempt to control and extinguish the fire, firefighters are, in effect, protecting evidence. Fire suppression personnel, including fire officers, too often do not recognize their contributions in the overall fire investigation process, especially through preservation of physical evidence at the fire scene. Their ability to preserve the fire scene is often the single most critical element in the investigation.

Fire suppression forces have four functions with respect to fire investigation on the scene: observation, recognition, preservation, and notification.

Observation: This is the ability to note the particular elements,  conditions,  and circumstances of the fire and fire scene. Generally, firefighters have the best opportunity to view the fire scene in its most undisturbed state during and immediately following the fire. Often these observations play a key role in determining the presence and location of specific pieces of physical evidence.

Recognition: Firefighters must recognize physical evidence, which helps the investigator determine the area of fire origin.

Preservation: Firefighters must protect fire materials at the fire scene and keep them intact until they can be analyzed, documented, and collected.

Notification: After discovering and protecting artifacts, firefighters must notify the incident commander to ensure that the appropriate authority responsible for the documentation and collection of the evidence as dictated by statute, local ordinance, or departmental SOPs is in turn notified.

The use of fire hose streams can threaten the destruction of physical evidence at the scene. When possible, use caution in straight-stream applications, particularly at the base of the fire, because that may be the area of origin. Valuable evidence of the fire cause, or ignition, often is found at the area of origin. The use of hose lines, particularly straight- stream applications, can move, damage, or destroy evidence.

Nozzle control is an important consideration concerning the investigation. The use of excessive water at the fire scene can dilute some combustible or flammable liquids. Dilution can result in a negative test for the presence of an ignitable liquid in a field test or laboratory analysis when one was actually present. Excessive water also can cause matches or burned paper or wood to float away from their original location, possibly preventing their discovery. Also, control the excessive use of water in areas from which it cannot easily be drained, such as where the investigator may wish to look at the floor for possible fire patterns. When draining the floor of standing water, position the drain hole where it will have the least impact on the fire scene and fire patterns. In general, limit the use of water to what you need for fire control. Avoid excessive use of water until after the investigator examines the scene.

It is during the overhaul phase of firefighting that most of the remaining evidence not damaged by the fire is destroyed or displaced.  Excessive overhaul prior to the Investigator’s examining the scene can affect the investigation’s outcome (maybe resulting in failure to determine the area of origin or the cause or person responsible for the fire). Ideally, an investigator on the scene during the fire, and especially during overhaul, should assume some supervision of the overhaul operation. This is the best way to ensure the preservation of the fire scene. Firefighters have the dual responsibilities of checking for fire extension and preserving evidence and since the two seem to conflict, searching for hidden fire usually wins out. However, if you approach overhaul in a systematic manner, you can accomplish both tasks.

You can accomplish an overhaul in two phases. Limit the first phase to that which is necessary for inspection of fire extension until the investigator examines the scene. Begin this phase at the outermost boundary of fire spread, away from the area of greatest damage, so you will be less likely to interfere with evidence collection and examination. The second phase involves a more thorough overhaul of the room or space after the investigator has examined and reconstructed the scene and analyzed the fire patterns.

Salvage operations also have a tremendous impact on fire scene examination because they often involve clearing or removing fire debris and contents from the fire area. Even the slightest movement of the fire debris,  fixtures, or contents from their original locations can impact the factual reconstruction (the physical act of locating the contents in their pre-fire positions) of the scene. Altering the site can adversely affect the analysis of fire patterns. However, the most serious consequences occur when firefighters completely remove contents.  If the investigator does not have an opportunity to view the fire-damaged room intact, the entire investigation may be jeopardized.

There are few instances besides when it is prudent to mitigate the incident by removing a specific hazard in which the contents of a room, space, or structure have to be removed prior to an investigator’s examining the scene. There is nothing more frustrating to an investigator than to arrive on a scene during firefighting operations only to discover that the evidence has been “rescued” by fire suppression forces.

MOVEMENT OF KNOBS AND SWITCHES

All Firefighters should avoid turning knobs and “throwing” or resetting switches on any equipment (motors, for example), appliances (stoves), or utility services (breaker panels or fuse boxes, wall switches) at the fire scene until the investigator can observe, analyze, and document their condition. The position of knobs and switches may be crucial to the investigation, particularly in developing fire ignition scenarios. These components, often constructed of plastics, can become very brittle when subject to heating. Any movement, besides altering their original state, may also cause them to break, thus possibly losing their interpretive value.  When necessary, utility services should be disconnected at remote locations; even then, their condition and position should be documented.

USE OF POWER TOOLS

Carefully control the use of gasoline- or diesel-powered tools and equipment. Prohibit their use near the suspected area of origin or when you suspect an ignitable liquid is present. Refuel any fuel-powered equipment or fire fighting tools outside the perimeter of the fire scene and away from any fire debris. Firefighters should be aware that the introduction of fuel from their equipment will impact the evidentiary value of any samples taken and could lead to erroneous conclusions concerning evidence analysis.

Limit access to the scene to those persons, firefighters, and other emergency and rescue personnel who must be there to perform the task at hand. Limiting personnel is a legitimate concern if there is a possibility of contaminating, damaging, or destroying evidence. When possible, postpone the activity or operation until evidence is protected, analyzed, documented, and collected. When circumstances dictate, such as a verified crime scene or a fire involving a fatality, all firefighters making entry should be logged in with their name and purpose for being there recorded.

Contaminating the fire scene refers to the “condition of impurity resulting from mixture or contact with a foreign substance.” Such contamination can lead to invalid hypotheses, opinions, or conclusions about the fire’s origin and cause. Contamination is possible when firefighters use or refill gasoline-powered tools in an area where an investigator later tests for the presence or omission of a liquid accelerant.  Firefighters can unknowingly contaminate the fire scene when moving debris or when walking through the scene with ignitable liquid residue on their boots or equipment.

Two key concepts concerning firefighters’ responsibilities in preserving the fire scene are awareness and attitude. Once firefighters are aware of the investigative ramifications and impact of their operations and the important role they play in the overall investigative process, they will make preservation of the fire scene a priority. It does not just happen it requires a conscious effort and attitude on the part of firefighters.

Firefighters play a vital role in preserving the fire scene. Successfully preserved fire scene is paramount for accurate determination of cause and origin of the fire. Firefighters must be instructed during basic rescue training that they have responsibilities on the fire scene regarding an investigation. This training should consist of learning to recognize the “indicators of incendiarism” such as multiple fires, incendiary devices,  trailers  (a trail of combustible materials used by an arsonist to speed the spread of fire through a structure), and the presence of ignitable liquids or containers at the area of origin.